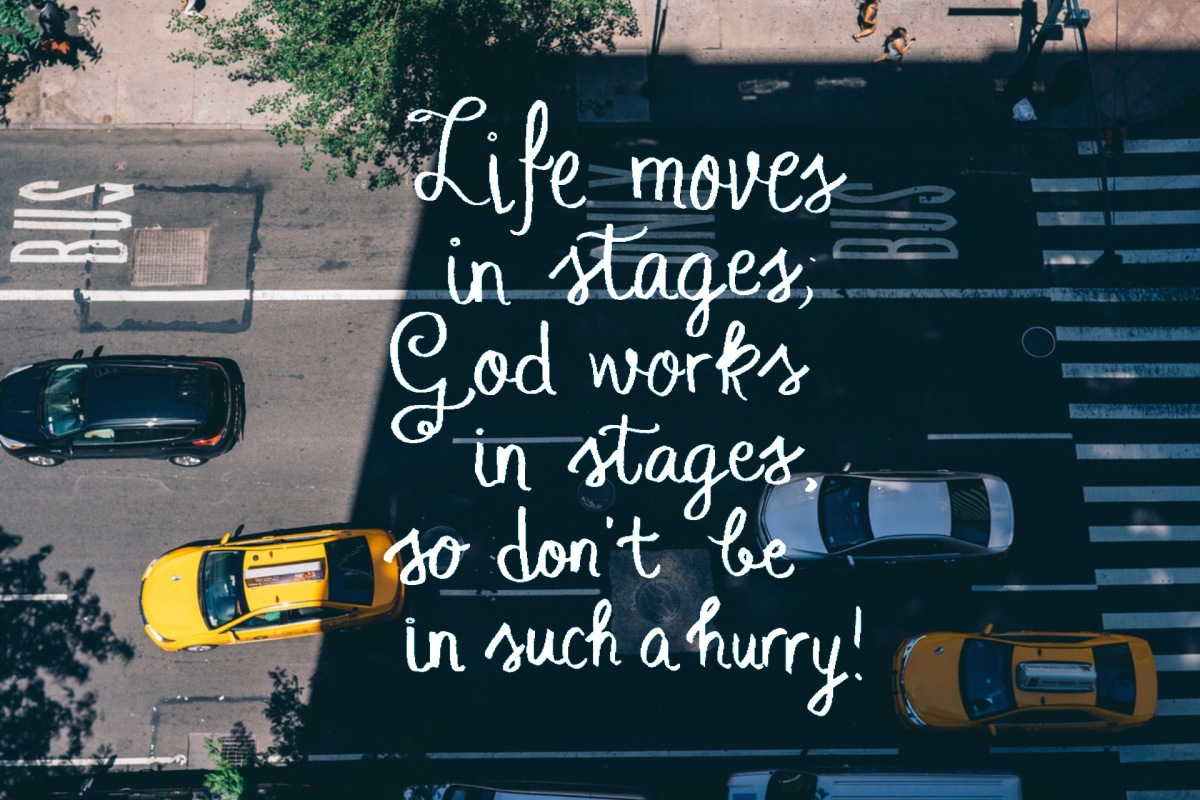 What if things happened instantaneously? Let’s say I wanted to make banana bread. What if, after preparing the correct measurements and portions of the ingredients and mixing it all up, the bread magically appeared before me? Or what if I arrived at a certain country, expecting to have a job, then after sending out resumes, I immediately get calls and offers from various companies? Oops that sounded too real. Actually, it is. You can tell that I’m not a very big fan of waiting and waiting patiently.

As I mentioned in my previous post, I was (and still am) waiting for a job after sending more than a dozen resumes to various companies. During this period of waiting, thankfully, I haven’t been much of a couch potato. However, after all the people in the house have gone to work and I am left alone, I wonder: when will I ever get to work and earn money? LORD, how long must I wait?

One of the grave effects of the Fall of man was the sudden default setting of the human mind to think ill of God’s intentions and grow impatient during a period of prolonged waiting. Whatever it is you’re waiting for–a knight in shining armor, damsel in distress, a job, healing, or financial breakthrough, you despise the fact that you have to wait. (If you don’t, please teach us antsy, anxious beings your secrets!)

To be fair, I have been enjoying my prolonged (excess) hours of sleeping, reading, and writing that would have otherwise spent on working. It is during these quiet and calm moments where God is teaching me more about Him. I have been studying the book of Exodus during my personal quiet time, and one day, I read Exodus 17. The first verse immediately caught my attention:

“Then all the congregation of the sons of Israel journeyed by stages from the wilderness of Sin, according to the command of the LORD, and camped at Rephidim, and there was no water for the people to drink.” (Exodus 17:1, NASB)

Two words caught my attention: by stages. The Israelite exodus from Egypt and journey to the Promised Land did not happen overnight. In fact, it took them forty years to reach the place! More than the length of the journey, it was the word “stages” that captured my attention. God did not rush their growth. He led them by the hand, one step at a time. In this chapter, during that particular stage, water, an important and valuable necessity, was cut out.

Imagine the scenario. 2.5 to 3.5 million people travelling on foot with their children, goods and animals, setting up their tents and temporary shelters in a wilderness–a barren expanse of land. These were the people who crossed the Red Sea on dry land. These were the people who witnessed the plagues and the Passover and emerged from the plagued country of Egypt unharmed and wealthy (because they looted their Egyptian neighbors). Perhaps when they arrived at Rephidim, there was still water inside their jugs and pots, but after a few days, they quickly ran out. Perhaps they waited for a source of water to be discovered, but there was none. So these former slaves and now freed men went up to their humble leader, Moses, and quarreled against him, grumbling and complaining. “Why did you take us out of Egypt to kills us and our kids and animals with thirst?!” I felt hurt for Moses and for the LORD while reading these accusatory remarks. They could have just come up to Moses and asked him to pray to God for water. Why did they have to think evil of him? Why did they have to question God’s goodness and love for them?

As I meditated on these verses, I grew disgusted, not at the Israelites, but at myself. I did the same thing to Jesus by complaining and grumbling for not giving me a job during this stage in my life. I was so eager to move to stage ten, but He is still working on me at stage three. I wrote verse 1 according to my present circumstance so I could get a clearer idea of God’s message to me that morning:

“Then [Jenny] journeyed by stages from the city of Metro Manila according to the command of the LORD, and camped at North Hollywood, and there was no job for her to take…yet.”

The LORD already planned a means to provide water for Israel, but His timing differed from theirs. God has already planned to give me a source of income, but His timing differed from mine. If I claim Him to be my Lord as I said He is, then I should trust His timing.I confessed my sin to the LORD that day, for questioning His goodness and love for me. Every evil act and response is founded a wrong belief and view of the living God. I did not truly believe that God wanted what was best for me. I did not understand that God’s ways are higher than mine, and that He chose to work in stages.

If you think about it, life works and moves through stages. Sitting on a chair happens in stages: first you approach the chair (or get one), place it on solid ground or pull it out, bend your knees, place your buttocks on the seat, and lean comfortably. The same goes for the hundred other ordinary things we do out of habit and thousands of experiences we go through in our lifetime.Every stage begins and ends according to the will of God. Indeed they end, even if they seem like forever.

My stage of waiting for a job will eventually be over because God intends that I work. The ideal scenario is that as we move from one stage to the next, we become better individuals, and for the child of God, resembling Christ more and more.

As I contemplate on the idea of God working in stages, I picture a stage Father. In the theater of life, He is the Father who not only cheers for us in the seats, but also directs, designs our costumes, provides the props, writes the script, and does my make-up. He’s the only control freak I trust because He sees everything and does everything perfectly. Most importantly, everything, absolutely every single thing that He does is done out of His love for me and for everyone He created.How are you responding to the challenges you currently face in this stage of your life? Know that behind every act of God towards you, no matter how undesirable it may seem, is an act of love. Trust Him in this stage. He is bringing you to the Promised Land. 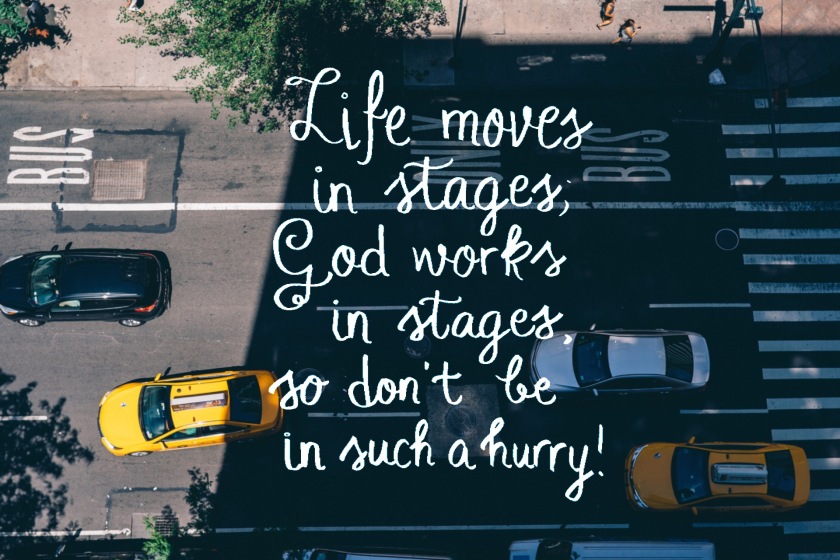 Storyteller who actually prefers to read and listen to stories. Food fan. Budding events host. Collector and avid user of colorful pens and stack-high notebooks. Media enthusiast. Learner. Adventurer. Introvert. Child and servant of the one true King. Forgiven and loved. Hello, my name is Jennifer Grace. You can call me Jenny. Welcome to my story of grace! :) View all posts by Jenny J. Talam

Hey there! I'm Jenny. Thanks for dropping by! I hope that whatever you find and read here will encourage, engage, or even convict you and do you spiritual good. Join me as I discover how God's ancient truth applies to our modern, millennial lives!